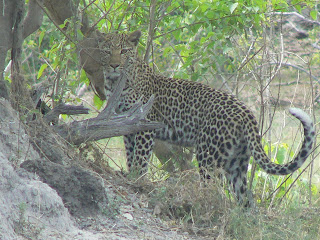 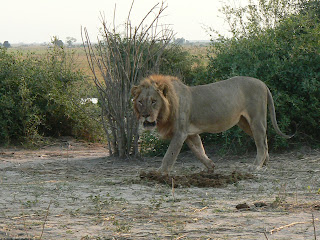 Hi all,
Well, all the post-safari duties have been done. Kit cleaned and packed away, sore muscles have been taken care of, outstanding e-mails have been caught up and some relaxing time has been had.
We had a great safari through the major National Parks of Botswana and fun was had by all. Our two Dutch friends enjoyed themselves, even though we did not manage to see the quantity of predators they were hoping to see. Maybe it had something to do with the name they gave their safari...."Botswana Predator Tour" (LOL)
Niels and Dennis, being no big fans of "chickens" (any and every bird was called a chicken) buckled a(teeny)bit under the double pressure that Toff and i put them under in our efforts to get them to like bird-watching and there were some great photos taken of some birds, that just did not want to go away, including the Lilac-breasted roller.
The first part of the early morning drives were spent looking for the ever-elusive Leopards and after a cuppa with biscuits, the search changed to Lions. The afternoon drives were vice versa. I think that all of us can honestly get a degree on spotting the perfect leopard-tree from any distance away...just a pity that the cats did not agree with us.
We had several good sightings of the big cats and even saw two young cubs, all by themselves, on the first day out.That was followed by seeing two big male lions on the second day and we had leopard sightings enough to be able to get some great pics. We even witnessed (in sound, not quite a clear sight) a leopard catching and killing a baboon.
in the next few days, i will add and comment on some great views we had.
Have fun and be careful.
Posted by kiddy at 2:02 AM

kiddy
Kasane, Chobe, Botswana
i love watching people at play, interaction between animals, thinking about issues, i love being physically active especially if it's outdoors, i just love a good party with loads of dancing. Positive thinking, directness and would like answers to all questions.