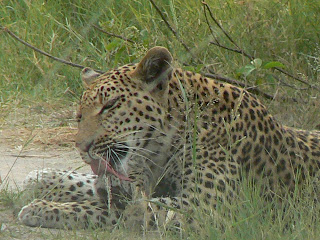 well hi there again,
it took me a while to get back to this site, but i just had to get back to show you some more pics of our beautiful Leopard. i am bragging of course.
On this last safari, Toff put his extraordinary sense of finding the big cats, to good use. He found this leopard and stuck to it....even when it dissapeared, he drove to where he thought it was going to re-appear and....voila, it did!! Niels and Dennis where over the moon with this sighting, because that is what they were there for. We had enough time to take all the pictures we wanted.
The leopard got so relaxed that it was just laying there, grooming itself, just like a house-cat, except much bigger and very dangerous. Somehow, you still get the feeling, the urge, to get closer and stroke it's fur and maybe get it to purr.
Posted by kiddy at 12:27 AM

kiddy
Kasane, Chobe, Botswana
i love watching people at play, interaction between animals, thinking about issues, i love being physically active especially if it's outdoors, i just love a good party with loads of dancing. Positive thinking, directness and would like answers to all questions.